Housing policy is often seen as a tug of war. We can build more homes to make them more affordable, or we can make homeowners happier by limiting supply. This is mistaken: building homes can add so much value that change can be win-win for nearly everyone. But some object that homeowners will never vote for more supply, even if it would benefit them. Astonishing new evidence from Israel shows how wrong that is. 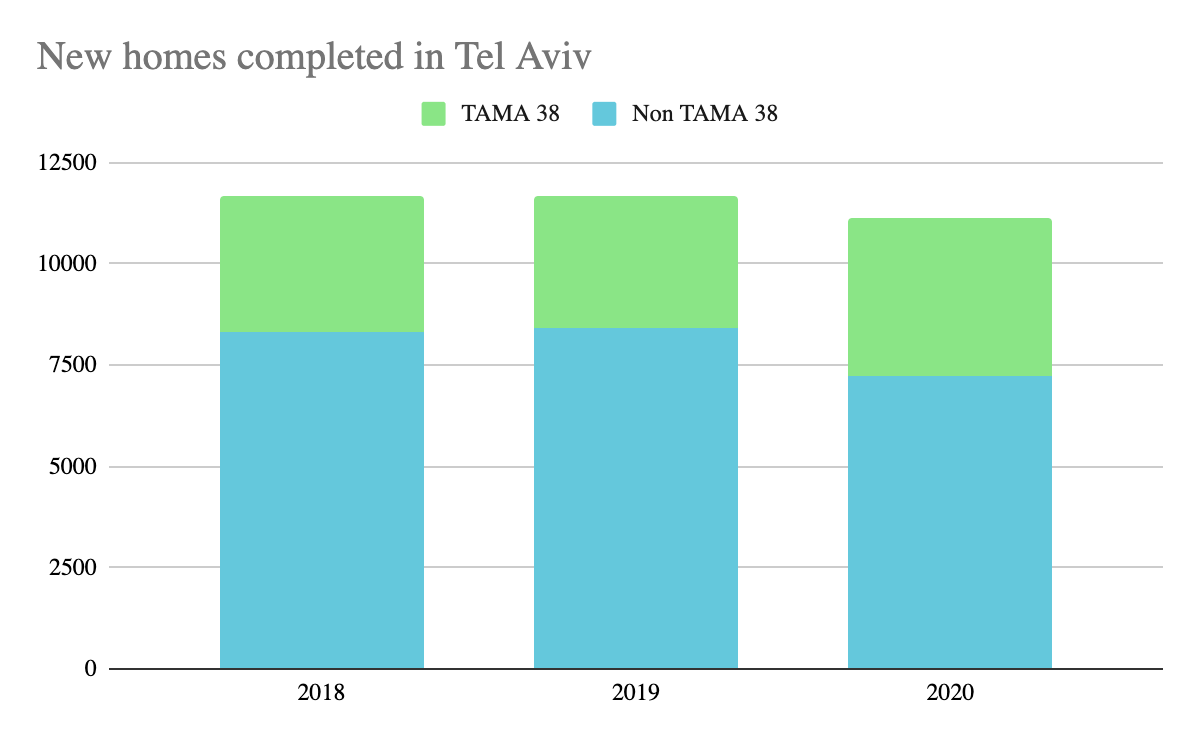 The deputy head of Israel’s Urban Renewal Authority, Einat Ganan, has explained that ‘TAMA 38 has been one of the main tools for creating new housing units on densely populated and expensive land in the centre of the country.’

TAMA 38 is, in its core idea, quite similar to the ‘street plans’ proposed for England in Policy Exchange’s Strong Suburbs report – namely letting small groups of people opt to allow change that would benefit them.

Some – though not entrepreneurs or people struggling to pay for repairs – think that no-one will bother to do this, even if the Government lets them: people like their nice, comfortable suburban lives, and won’t want the fuss of voting or selling and moving, even with hundreds of thousands (or even millions) of pounds on the table.

That argument has considerable force, but not all suburbia is middle-class paradise. Many run-down streets have cash-poor owners, who would be grateful for a way to generate income, or house-shares (‘HMOs’) owned by landlords. Those landlords would generally be delighted to share with their tenants some of the tremendous upside from passing a street plan (indeed, the plans set out in Strong Suburbs, unlike TAMA 38, actually require generous payments to tenants).

Because a street plan can in some cases increase the housing capacity of a plot by a factor of six, just a few of those streets voting ‘yes’ could give a huge boost to the supply in expensive cities like London. That’s not just a theoretical argument – it’s exactly what has happened in Tel Aviv.

TAMA 38 also disproves other objections to community-led intensification schemes like street plans. Street plans are, in effect, an extension of neighbourhood planning, the system established in 2010 in which parishes or neighbourhoods can set their own ‘neighbourhood plan’ through a vote. In principle, neighbourhood plans can give locals the power to add housing to an area, but this usually doesn’t happen. Some therefore question whether street plans will add more homes.

Strong Suburbs suggests plans for single stretches of street, with no more than a few dozen houses. By contrast, parishes and other neighbourhood planning areas usually have thousands of residents – in some cases, tens of thousands – often because councils reject applications for smaller areas. Agreement grows exponentially harder as the number of people increases, as anyone in Whitehall will appreciate. Equally, the chance of finding an entire logically drawn area filled with people willing to tolerate the disruption of construction shrinks exponentially as the area gets bigger.

It is simply impractical to get thousands of households in neighbourhood planning areas to agree to major and disruptive change in planning policy. However, TAMA 38 shows that this is not the case when the voting units are small: in a huge number of apartment buildings, residents have been able to agree on major but mutually beneficial changes.

That said, TAMA 38 is a lot more disruptive for residents than street plans would be. You cannot redevelop a block of flats without everyone in the building moving out. TAMA 38 forces dissenting owners out of their homes, at least for a time. Street plans do nothing like this, because streets can be developed one house at a time. That is why it is enough for street plans merely to give planning permissions for each owner to use if they wish, letting clusters of four or even two semi-detached houses be viably redeveloped when they want, while their neighbours remain in place indefinitely. The profits will be greater if more sell at once, as they often will, but it may take years before the full plan is implemented.

There are other important differences between the two ideas. Street plans would cover many buildings, not individual blocks of flats. Unlike Strong Suburbs, TAMA 38 makes no effort to protect the neighbours from harmful spillover effects. TAMA 38 is a ‘national level policy to upzone an entire country,’ without the local variation allowed by Strong Suburbs. And TAMA 38 reduces the developer contributions paid to local authorities, whereas street plans would effectively increase them.

In fact, TAMA 38 may end up being cancelled due to these issues and because it has mostly delivered housing in expensive areas, when its original goal was to fund earthquake retrofits across the country. But that might be music to the ears of Robert Jenrick and his MHCLG team, who have said their goal is to deliver more housing in unaffordable places.

Of course, there are other differences. Unlike Israel, England rarely has earthquakes, which give a powerful motivation to upgrade buildings. England’s housing stock is also vastly older than that of Tel Aviv, and we are understandably reluctant to damage historic buildings. But comparison with TAMA 38 helps clear up a few misconceptions about street plans in particular and community-led development in general.

TAMA 38 was not without its flaws. Redeveloping blocks of flats is more difficult than redeveloping streets, and it made insufficient provision for impacts on others. But its enthusiastic take-up by homeowners in expensive Tel Aviv shows us how a similar community-led development scheme might work in Britain.

Without such ideas, we will never escape the endless loop of nearly eight decades of planning reform failure. This requires addressing the fundamental challenge of making development acceptable to, or even popular with, locals. The successes and problems of TAMA 38 show how planning reformers must be innovative and think single-mindedly about potential political obstacles. Without doing that, ambitious plans to fix the planning system will continue to end in ignominious failure.