A farmer near the village of Simiri, Niger. AFP / Getty Images

A farmer near the village of Simiri, Niger. AFP / Getty Images

In contrast to the parade of horrors that dominate the daily news throughout the year, Christmas time has come to provide a short window of opportunity to reflect on and to express gratitude for all the good things in life. For much of the year, it is easy to forget that – away from the front pages of our newspapers and headline news on television – billions of people go about their lives unmolested, enjoying incremental improvements that make each year better than the last.

Over at HumanProgress, we strive to document the improving state of the world – a daunting task, considering the constant stream of technological and scientific breakthroughs that are transforming our lives for the better in real time.

Still, consider that in the last week alone, we have seen researchers at the Imperial College London discover “genes which make people intelligent.” This discovery, scientists believe “could be manipulated to boost brain power.” If successful, super-smart humans will be able to accelerate the already fast process of scientific discovery in the future.

Or consider the fact that Elon Musk’s SpaceX Falcon 9 rocket has successfully “blasted off from Cape Canaveral, delivered communications satellites to orbit before its main-stage booster returned to a landing pad.” Put differently, space exploration has just become much more affordable, bringing the transformation of the Homo sapiens into an interplanetary species one step closer to reality.

If the above examples of progress strike you as little amorphous, consider the recent breakthrough in the fight against lung cancer. According to the CEO of Merck, the company has developed “a new category of drugs that stimulates the body’s immune system.” Keytruda, Kenneth Frazier said, “will extend [the life of lung cancer sufferers] … by approximately 13 months on average.” “We know that it will reduce the risk of death by 30-40 percent for people who had failed on standard chemo-therapy,” Frazier continued. In the decades to come, Merck’s discovery will be especially relevant to the millions of people in poorer countries, where a relatively high number of people continue to smoke. 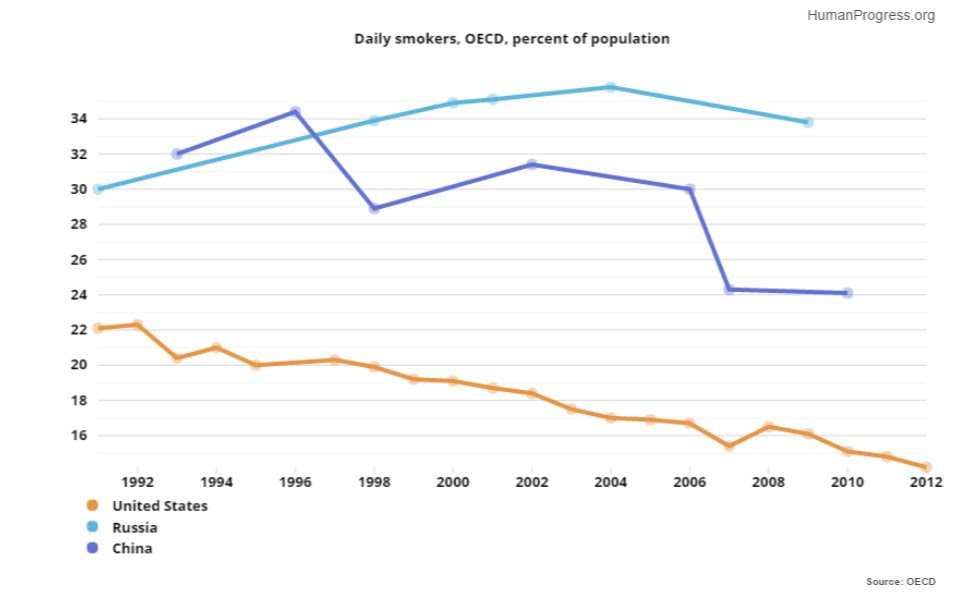 Similarly, there has been great progress in the development of the so-called “edible electronics.” A new technology, which was developed by Bristol Robotics Laboratory in Great Britain “will allow the doctor to feel inside your body without making a single incision, effectively taking the tips of the doctor’s fingers and transplant them onto the exterior of the [edible] robotic pill. When the robot presses against the interior of the intestinal tract, the doctor will feel the sensation as if her own fingers were pressing the flesh.” As a result of that and similar medical advances, major surgeries will become rarer. That will benefit patients by reducing the trauma to the body and healthcare systems by reducing expenses associated with patient recovery time.

Charles Kenny, a fellow optimist who works at the Center for Global Development, has recently penned an excellent article entitled 2015: The Best Year in History for the Average Human Being. As Kenny shows, humanity continues to make significant progress against the four horsemen of the apocalypse. “Famine deaths,” he writes, “are increasingly rare and increasingly limited to the few areas of the world suffering complete state collapse.” Indeed, as we show at HumanProgress, in 1962, people in 50 out of 152 countries surveyed consumed less than 2,000 calories per day. By 2011, that was true of one country (Zambia) out of 172 countries surveyed. 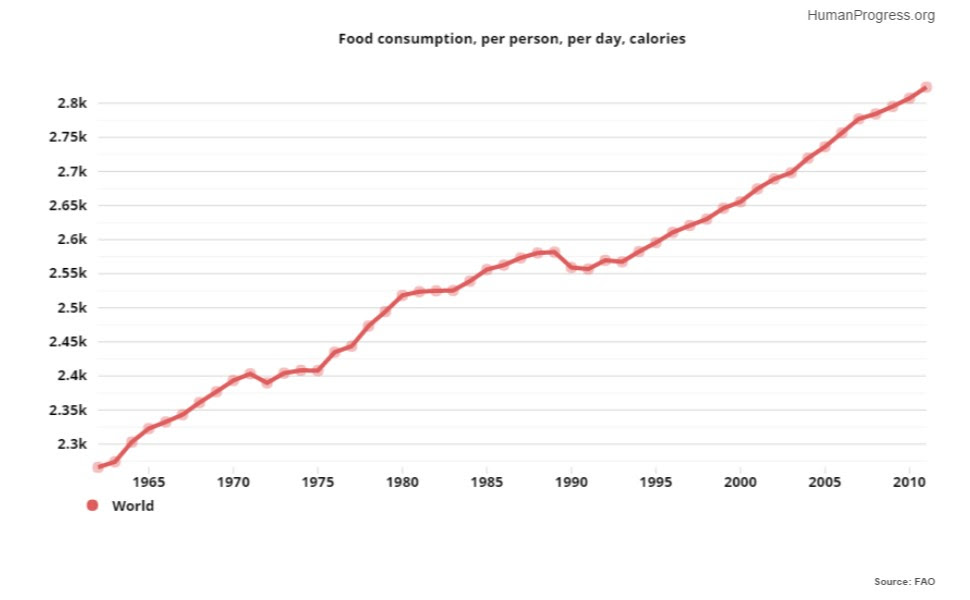 When it comes to pestilence, Kenny points to the retreat of Ebola, which took some 11,000 lives during the recent outbreak, but was then quickly contained, relative to past outbreaks. New infections have fallen to single digits in recent months. Since 2000, worldwide cases of measles have declined by two-thirds, and there has not been a single case of polio in Africa for over 12 months. Child mortality rate has gone down by some 50 percent between 1990 and today. A similar trend can be seen in terms of infant mortality. 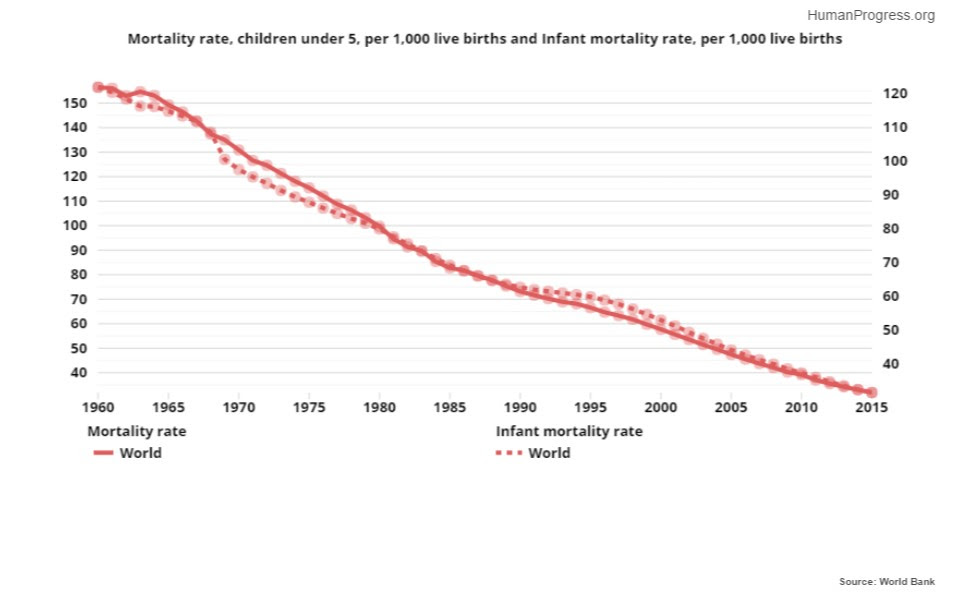 When it comes to war and death, the picture is a little more complicated. First, let’s look at the good news. As Harvard University Professor Steven Pinker’s research shows, most forms of violence are in long term decline. “The decline in violence… is enormous in magnitude, visible on both long and short time scales, and found in many domains, including military conflict, homicide, genocide, torture, criminal justice, and treatment of children, homosexuals, animals and racial and ethnic minorities,” Pinker shows.

What’s true globally is also true of the United States. “In America,” Kenny writes, “despite its epidemic of mass-shooting events, the country is still far safer than it was in the past. The latest FBI statistics, reported this September, suggested that the trend toward lower rates of violent crime in the United States that began in the early 1990s continued at least through 2014.”

The same, unfortunately, is not true when it comes to terrorism and civil wars – as we are all reminded by the sad events in the Middle East in general and Syria in particular. And so, let’s have two cheers for a year that’s coming to an end. Let us rejoice in the progress that our species have made, spare a thought for those who are unable to partake in peace and prosperity, and remember the hard work that still lies ahead.

The left's unhealthy obsession with Israel

Brexit vs Remain – what's the score when it comes to trade?

To fix social care, stop assuming it's an inevitability