The Government must stop capitulating to Sinn Fein’s shenanigans 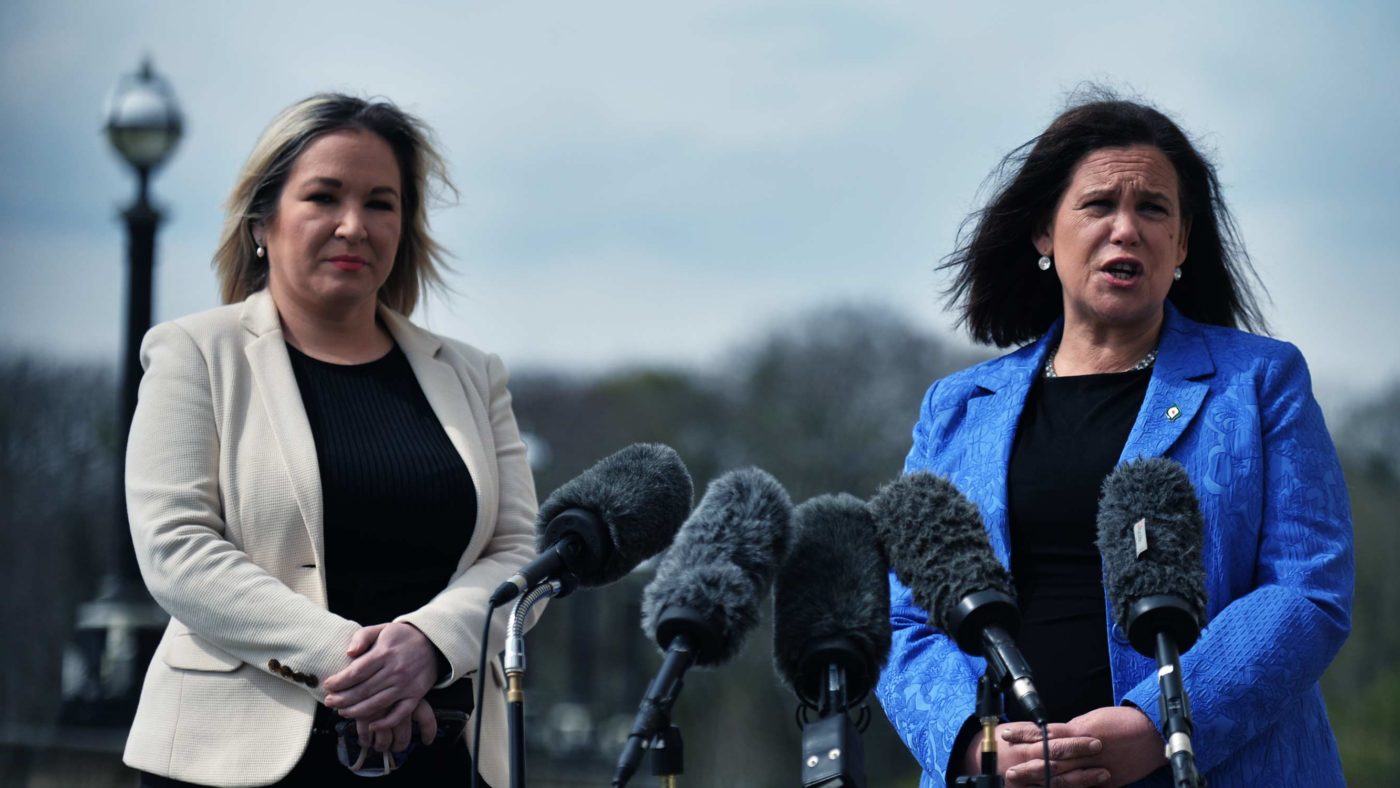 Northern Ireland’s regional government is on the brink of collapse yet again, with Sinn Fein threatening to withdraw its support for devolution yesterday. The current administration only restarted work in January 2020, after the republican party refused to operate power-sharing for three years, issuing an ever-changing set of ‘red-line’ demands for its restoration.

By way of background, last week the incoming Democratic Unionist Party (DUP) leader, Edwin Poots, announced that Arlene Foster would be replaced as First Minister by Paul Givan, the MLA for Lagan Valley. Mrs Foster stepped down from her post officially on Monday, triggering a seven day scramble to save Stormont.

Northern Ireland’s power-sharing rules determine that the biggest party in the Assembly is entitled to nominate a new First Minister within one week of a resignation. However, the largest nationalist party, which is currently Sinn Fein, must then nominate a Deputy First Minister to share this joint office.

With wearying predictability, republicans say that they won’t re-appoint Michelle O’Neill unless the government passes Irish language legislation at Westminster; a course of action that would crash Stormont. Sinn Fein claim the DUP did not keep its promise to implement an Irish Language act, as part of the New Decade, New Approach (NDNA) agreement that restored power-sharing last year. Never mind that the devolved executive has been rather preoccupied since then with a global pandemic.

Ironically, the NDNA included safeguards that were supposed to prevent Stormont from collapsing every time the two big parties had a serious row. Alongside countless other prospective laws, they haven’t been enacted either. According to Sinn Fein, though, its preoccupations involve indisputable ‘rights’ which must be prioritised over other parties’ goals.

That means Northern Ireland faces the prospect of an early Assembly election, which the DUP will be keen to avoid, as its recent opinion poll results have been little short of lamentable. Or the Northern Ireland secretary Brandon Lewis could intervene and legislate on a devolved matter directly from Westminster, in order to placate republicans, which is likely to infuriate unionists. Alternatively, Sinn Fein has suggested that the governments in London and Dublin convene hot-house negotiations, of the type that have punctuated the political process in Northern Ireland regularly since devolution was established in 1998.

Republicans thrive on nurturing grievances and they have successfully pulled the same trick repeatedly before, so why wouldn’t they try it again?

Back in 2003, when the DUP and Sinn Fein replaced the more moderate UUP and SDLP as Northern Ireland’s largest parties, they refused to operate the Good Friday Agreement. They agreed to share power only after they’d negotiated their own deal in 2007 at St Andrews in Scotland. Just three years later, they were locked in more talks. This time the dispute was over devolving policing and justice powers from Westminster, and it was resolved by the Hillsborough Agreement.

In 2014, Sinn Fein refused to implement the coalition government’s welfare reforms in Northern Ireland. The Stormont Agreement got round that impasse, with Westminster using the time-honoured method of promising the executive large amounts of taxpayers’ money.

Less than a year later, power-sharing stalled again after the police accused the IRA of killing its former member, Kevin McGuigan, during a republican feud. For a time, the DUP refused to work with the republican movement, because it was literally accused of murder. Nevertheless, when negotiations to restore power-sharing began, it was Sinn Fein that issued new demands, including asking for more funding for welfare, as well as Troubles’ inquests into alleged state killings. The government stumped up enough cash to facilitate the ironically named ‘Fresh Start’ agreement.

For one year, Stormont enjoyed relative stability, before the RHI renewable heating fiasco intervened. By January 2017, Martin McGuinness had resigned as deputy first minister, citing Arlene Foster’s refusal to step down while the scandal was investigated. This pretext was swiftly forgotten, as Sinn Fein compiled a fresh shopping list that it said had to be fulfilled if it were to return to government. By January 2020, these demands were met to its satisfaction.

Sinn Fein has shown remarkable audacity to repeat this formula so many times, but its behaviour is hardly surprising, given the organisation’s fanatical and bloody past.

It’s far more astonishing that successive governments, urged on by their counterparts in Dublin, have facilitated this charade over and over again. Then there are the journalists, opposition politicians, pundits, and even the public, who seem to fall for the high-wire political drama every time. The inevitable deal is nearly always met with elation, or at least relief, as if, this time, finally, it will bring responsible, durable government to Northern Ireland.

In fact, the Stormont Assembly, when it operates, is chronically unstable and has failed repeatedly to tackle the province’s enduring political problems. If Givan does not become First Minister successfully, we would at least be spared the fresh farce of Northern Ireland’s political figurehead taking orders from his party leader Edwin Poots, who is also the province’s agriculture minister.

Unionists are already frustrated and angry at the UK government for agreeing to the Northern Ireland Protocol and dividing up the country at the behest of Irish nationalists. If Brandon Lewis presides over another capitulation to Sinn Fein, by enacting language legislation or convening talks aimed at placating its demands, he will only exacerbate tensions in the province.

Owen Polley is a writer, commentator, consultant, and the co-author ‘An Agenda for Northern Ireland After Brexit‘.