Why are there so few female entrepreneurs?

Fewer than one in three entrepreneurs in the UK is a woman. This sets us behind countries like Canada, Australia, the US and the Netherlands. If British women founded businesses at the same rates as women in these other countries it could boost the economy by £200bn.

A new report from The Entrepreneurs Network, Inspiring Innovation, explores the barriers that are preventing women starting businesses and how to overcome them.

This is not uniform across sectors. We found that in GreenTech, which is a sector of entrepreneurs innovating to save the environment, the funding gap has closed. While in other sectors we looked at, like AI, female founders receive only 2% of all funding. 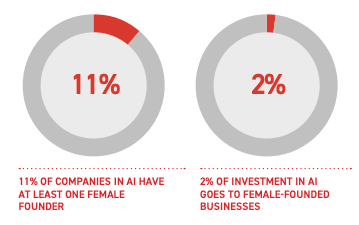 One reason GreenTech has managed to close the gender gap while other sectors have not, is that it has attracted a larger number of socially conscious investors who are more willing to overcome the venture capital industry’s biases.

Unequal household and childcare responsibilities remain a major driver of gender inequality. Only 10% of married couples split household chores equally – in 77% of straight couples, the wife does more of the work. It is harder to start and scale a successful business if you have an extra few hours of unpaid labour once you get home.

Women also experience a lack of role models and mentoring opportunities. People who work with or live in the same neighbourhoods as entrepreneurs are more likely to become entrepreneurs themselves. It seems like entrepreneurship isn’t innate – it has to be inspired.

It is not all doom and gloom though. Progress is being made on all of these fronts. The equity gap is shrinking as the venture capital industry realises how much money they are missing out on by under-investing in female entrepreneurs; over the past ten years, the number of women taking STEM degrees has increased by 50%; as progressive values spread, men are taking on a greater share of household chores; and a number of organisations are proactively creating networking opportunities and mentoring schemes for women and girls. 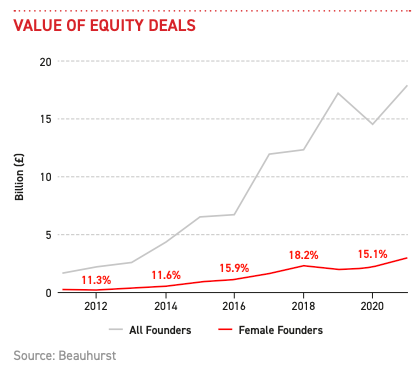 With the budget coming out today, we will all be looking to the Chancellor to see what policies he will propose to grow the economy. The talents of half the population are currently being underutilised, and policies which boost the number of female founders are an obvious place to look.

But the solutions may be found in unlikely places. Making good quality childcare more accessible is one of the most important things that can be done, and it will bring us in line with our peer nations that are outperforming us. But we don’t want more subsidies. The UK has some of the highest childcare costs and also some of the highest subsidies in the OECD, but we also have some of the strictest regulations which are driving up costs.  The evidence suggests that strict childcare ratios have only a weak impact on pastoral care but a significant impact on cost – if we loosened restrictions to Norwegian levels we could halve the cost of childcare.

Building more houses in Life Science and tech clusters will also boost the number of female founders. As long commutes are incompatible with the school run women will keep dropping out of these industries.

Change doesn’t happen with a single policy at the dispatch box, but a few practical changes to support female entrepreneurs could transform the economy – and society for the better.

Aria Babu is a Senior Researcher at The Entrepreneurs Network.

It's time to increase the cost of Nimbyism

Is the Omicron overreaction a harbinger of Christmas future?

The by-election dog didn't bark, but a pitiful turnout suggests problems for Boris