Why has productivity growth been so stagnant over the past decade or so? In the UK, policymakers have mostly bought a story, put forward by Bank of England Chief Economist Andy Haldane, that blames a long-tail of underperforming firms as the underlying cause. Yet the conventional wisdom is unsatisfactory for two reasons.

First, while it may help explain the UK’s low levels of productivity relative to the US and Germany, it doesn’t explain the recent slowdown.

The long tail isn’t new, in fact it looks as if the gap between the most and least productive firms has narrowed since the financial crisis. It doesn’t explain why productivity growth has slowed across the west either.  Second, data from the Bank of England suggests that the slowdown in the pace of productivity growth since the financial crisis has been almost entirely driven by Britain’s most productive companies. 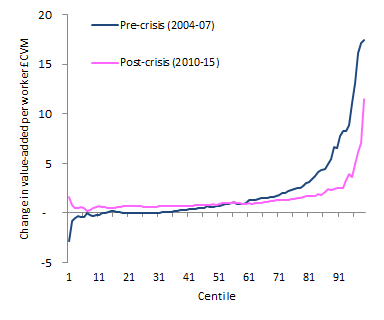 This isn’t to say we should ignore the long tail of unproductive firms. But it’s the wrong place to look if we want to understand why productivity has flatlined over the past decade. This is important because if poor productivity growth persists then it becomes much harder to solve other pressing problems, such as an ageing population and high levels of public debt.

A more promising explanation blames the West’s productivity woes on a decline in business dynamism. In a market economy, entrepreneurs play an important role. They identify when resources are under-utilised and shift them to more productive uses. This process is typically associated with a high degree of churn. Businesses in less productive industries go to the wall, while new businesses are set up in more promising sectors.

Evidence from the US and UK suggests that entrepreneurs have become less able to perform this key function. In the US, start up and exit rates have both declined since the 80s. The share of workers employed at start-ups has fallen from 20 per cent to 10 per cent, while the share employed by larger, mature firms has risen from 40 per cent to 50 per cent.

We’ve also seen a decline in skewness. In a dynamic economy, job growth should be skewed towards the fastest growing companies, but the difference in job creation rates between the top and bottom 10 percentiles has shrunk.

In the UK, we haven’t seen a similar decline in the start-up rate, though this may in part be hidden by the fact that most (87 per cent) of the growth in the business population since 2000 has been driven by firms with no employees.

However, research from the innovation charity Nesta found that pre-recession productivity was 7.4 per cent below potential due to insufficient business dynamism. They find that allocative efficiency – the extent to which the most productive firms were larger than the least productive firms in a sector – fell substantially between 1998 and 2007. It may be a cliche at this point, but while Britain is a great place to start a business, we need to be a lot better at scaling the best ones.

But, this raises the obvious question. Why has dynamism fallen? Two recent papers offer alternative hypotheses.

The first “Market Power and Innovation in the Intangible Economy” by Maarten de Ridder blames the decline in dynamism on the rising importance of intangible investments, such as IT systems or branding. The key feature of intangible investments, unlike investments in new factories, is their ability to scale. Developing a search engine algorithm or a social media platform may require large outlays initially, but once it’s been developed it can be duplicated at zero marginal cost. As a result, if an incumbent has made large investments in intangibles, it becomes much harder for new entrants to undercut them on prices.

Analysing data from French firms, de Ridder finds that the share of fixed costs has risen over time and that there’s a positive correlation between fixed costs as a share of total costs and the rise of intangible investments. He estimates that this has caused a large decline in business dynamism and lowered long-run productivity growth by 0.6 percentage points.

A second paper ‘The failure of free entry’ by Germán Gutiérrez and Thomas Phillipon identifies another culprit, regulation. They look at how responsive entry is to a ratio known as Tobin’s Q. It’s the market value of a company’s assets divided by the costs of replacing those assets. If the ratio is greater than 1 then it implies the market is placing a greater value on assets owned by companies than the cost of actually acquiring those assets.

In sectors where Q is high, we should expect new firms to enter as the opportunities for profit are the greatest. This used to be the case, but over the past two decades, this relationship has broken down.

This a more telling measure of declining dynamism. Focusing on broad measures of entry and exit can mislead as they are in part driven by demographics. If there’s a smaller pool of entrepreneurs to draw from, as there is in the US, then it’s even more important that they start up in the most profitable sectors.

On the face of it, the focus on Tobin’s Q supports de Ridder’s story. A high Q could be the result of unaccounted for intangible assets. However, Gutiérrez and Phillipon argue against this interpretation. Using a range of industry and firm-level measures, they find that increasing returns to scale have only modestly increased since 2000. There’s no clear pattern between industries that would explain the changes in entry rates.

The impact of regulation offers a more promising explanation. Regulation can make it harder for start-ups to enter markets. Gutiérrez and Phillipon quote the Chicago School’s George Stigler: “as a rule, regulation is acquired by the industry and is designed and operated primarily for its benefit”. Unlike start-ups, large firms can spread the cost of compliance over a large number of sales.

Using the Mercatus Center’s RegData metric, they find that increases in regulation explains why start-ups are no longer entering high Q industries.

In particular, they look at the impact of large changes in regulation, e.g. Dodd-Frank, the post-crisis financial regulation and find that “industries that experienced [a] large increase in regulation also experienced large increases in profit margins over the following three years, relative to other industries.” Lobbying too, has a negative impact. Incumbents can push for complex rules that disproportionately burden new entrants.

If Gutiérrez and Phillipon are right, and it’s worth noting that the prior research on the link between the scale of regulation and business dynamism has mixed findings, then it has some strong implications.

It should make us more sceptical when Facebook’s Nick Clegg argues that governments should regulate social media. We shouldn’t be surprised when complex laws like the EU’s General Data Protection Requirement end up helping incumbents. When laws are complex, lawmakers are often forced to rely on lobbyists for specialist information, what political scientists call the ‘legislative subsidy’.

Where possible politicians should allow competition to do the heavy lifting of consumer protection, and avoid regulatory measures that might reduce competitive pressures, such as price caps in the case of energy. Policies such as the FCA’s Regulatory Sandbox, which allows fintech start-ups to experiment with new business models without risk of regulatory sanction; and Open Banking, which makes it easier for customers to share their banking data with third parties securely, should be welcomed.

If we’re to address the long-term causes of Britain’s economic stagnation, we need to remove the regulatory barriers preventing start-ups from competing with incumbents.

Sam Dumitriu is Head of Research at The Entrepreneurs Network