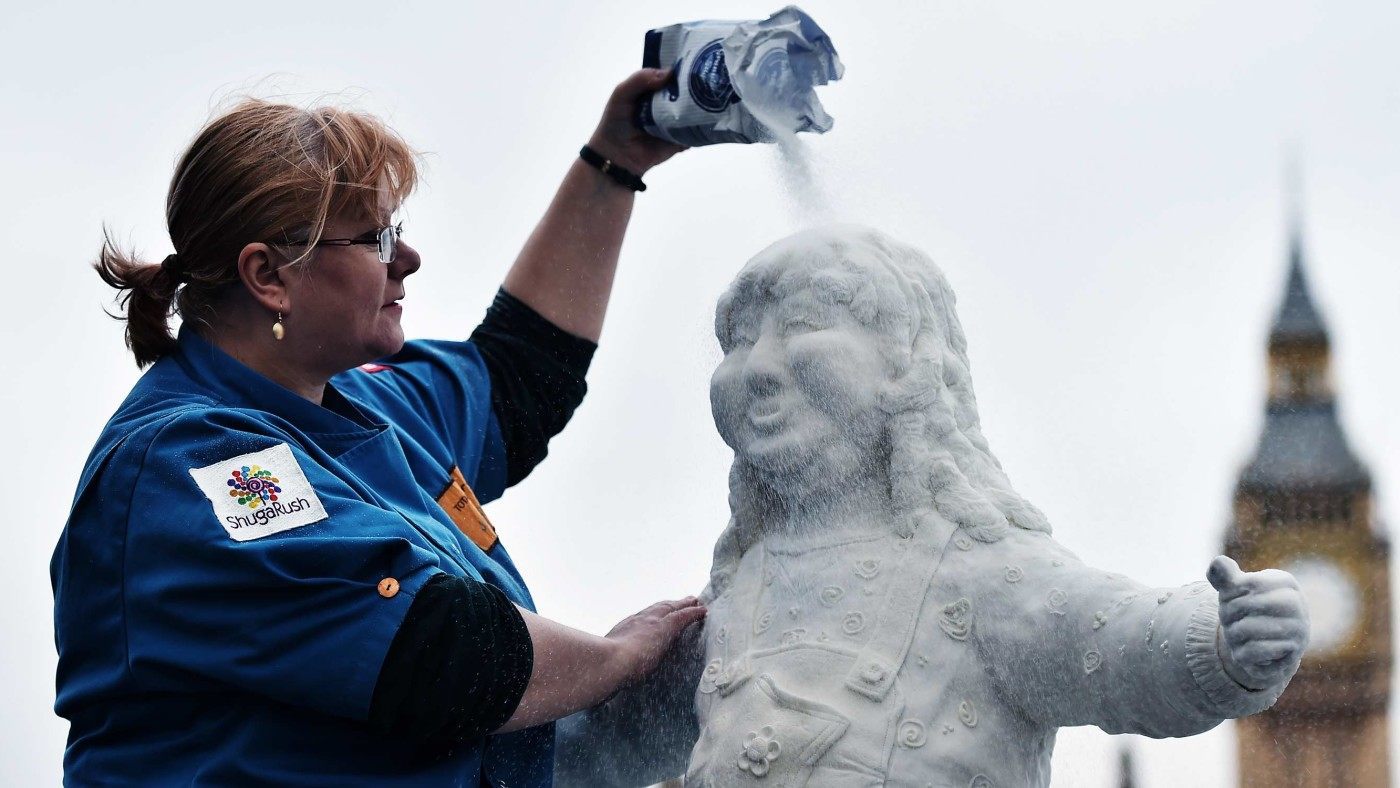 Food artist Jacqui Kelly pours sugar onto sculptures made from sugar by the Houses of Parliament to highlight the need for the public to reduce their sugar intake. AFP / Getty Images

Food artist Jacqui Kelly pours sugar onto sculptures made from sugar by the Houses of Parliament to highlight the need for the public to reduce their sugar intake. AFP / Getty Images

A common feature in British politics is pride in our ‘social safety net’. But the tectonic plates beneath the welfare state are shifting, and the public risk finding themselves bound tightly in the illiberal modern alternative: the social straightjacket.

The depth of the difference between the two is well-disguised. Very often the shift from one to the other is posed merely as the rationalisation of implementation, or as a cost saving measure. Yet they are two fundamentally different things.

Writing in The Times recently, Tim Montgomerie provided a very good example of what I mean when he advanced a supposedly small-state case for the sugar tax. The thrust of his thesis is that it cuts the state by reducing demand, and that: “Sensible politicians will always aim to prevent rather than cure.”

Superficially rational, there are in truth few instincts more fundamentally illiberal than the drive towards preventative policymaking. Like the pieces of safety equipment I compare them to, both models of welfare state are built with good intentions but make fundamentally different assumptions about their subjects.

A safety net is enabling. You still get to do all the things you were doing in the libertarian wilderness of the pre-welfare world, but the Government – or the big-hearted taxpayer – is on hand to help you if you need it. The warm glow that comes over advocates of the welfare state when they talk about it stems from this generous, morally-uncomplicated model.

In contrast the straightjacket is disabling. It operates by preventing you from doing the things which might lead you to call upon the safety net. The result is even less harm, with a cash bonus in the form of less wear and tear on the welfare system.

Yet the ethics of the straightjacket are much more complex. To employ it, one needs to judge another adult citizen incapable of making their own decisions – and oneself sufficiently super-competent to take those decisions yourself on their behalf.

Justifications for the shift towards the preventative model fall into two broad categories: the straightforwardly paternalist “we know best” approach, and the rationalisation/cost-cutting pose adopted by Montgomerie. Each is based on a series of moral assumptions which, due to non-ideological poses, have been under-examined even in the debate on the ‘nanny state’.

The former assumes that there is a moral imperative to physical health and longevity that justifies coercion. The Government treats national health statistics as if they were stats in a competition or video game, and the concept of ‘preventable death’ is wheeled out to justify the latest call to arms.

But why should the Government prevent every ‘preventable death’? The phrase so often means merely that a life could be coercively prolonged. The mere fact of that possibility does not justify action – yet every ‘preventable death’ is treated as a scandal. (That is setting aside the fact that, as long as humans are mortal, no death is truly preventable and that every soul spared from a vice-related death will die of something else, and that the NHS will still pay for it.)

Why should we not leave adults to strike for themselves the balance between health and pleasure? I thoroughly enjoy my tobacco habit, and accept the consequences. Yet it doubtless will cause some southward tick in the national longevity figures and thus justify, to somebody, meddling in my choices.

Any policy guided by aggregate figures cannot help but be illiberal. A liberal policy would ensure citizens were informed, and that such measures to address the consequences were in place, and then let the headline figures be what they will.

Other advocates of public-health authoritarianism will argue that I am making ‘bad’ choices, either through lack of information, or willpower, or biological weakness. But aside from the issue of cost, addressed below, what right have they to impose their personal standards on me?

(Many public health figures claim to want an informed consumerate – including Montgomerie in the above-linked piece. But that is only so long as it produces ‘correct’ choices: read Camilla Cavendish, head of the Number 10 Policy Unit, converting to coercive policy after seeing people use traffic-light food labelling to choose for taste, rather than health.)

The “cost to our NHS” argument, on the other hand, resembles nothing so much as the reasoning of an asylum keeper’s accountant.

Of course, the entire cost argument is deeply questionable on purely factual grounds. Not only do all the people dying of lung cancer or heart disease eventually die of something anyway, but by far the greatest challenge facing our social support system is that advances in medical science are leaving more of us than ever facing a drawn-out and very expensive senescence.

In other words, there is no citizen more expensive to the state than one who lives a very long life.

Yet the cost-cutting case also fundamentally changes the moral nature of the welfare state. Some commentators feared that the growing divergence in class lifestyles would undermine support for universal provision. Instead, the NHS has been co-opted to transmit – or impose – middle-class mores and preferences on the worse off.

To set no limits on one’s beneficence with an enabling, safety-net state may be generous; to offer no opt-outs when taking control of people to cut your costs is something else.

It resembles nothing so much, in fact, as a revival of the old Temperance instincts. Both that crusade and the modern public health movement – which is, as this article shows, an ideological one – take the form of middle-class projects whose primary object is ‘improving’ the poor: the class element of sin taxes has been oft-observed.

That the gap between the end of Temperance and the rise of public health was marked by the advent or working-class suffrage and the retreat of working class people from public life is surely no coincidence.

Such is the veneration of our welfare state, and so effective the veil of technocratic rationality drawn over the true nature of public health policy, that Britain is now a country where politicians find it easier to try to reform the public than the public services they use, and where official reports can talk unabashedly of transforming our public spaces into “theatres” for state-sanctioned, virtuous behaviours.

In closing his article, Tim writes that he hopes the sugar tax “will actually be controversial and that the debate it ignites will help to transform the national conversation about what we eat and drink.”

My hope is that it finally ignites the conversation we desperately need about the mutating role of our welfare state, which now aspires to carry us from cradle to grave without our feet ever touching the ground.

Regressive, ineffective and unnecessary – an online sales tax is no way to help the high street

This year's Tax Freedom Day is no cause for celebration

From energy to childcare, there's plenty the Government can do now to cut the cost of living