Could the Government really ditch the Northern Ireland protocol? 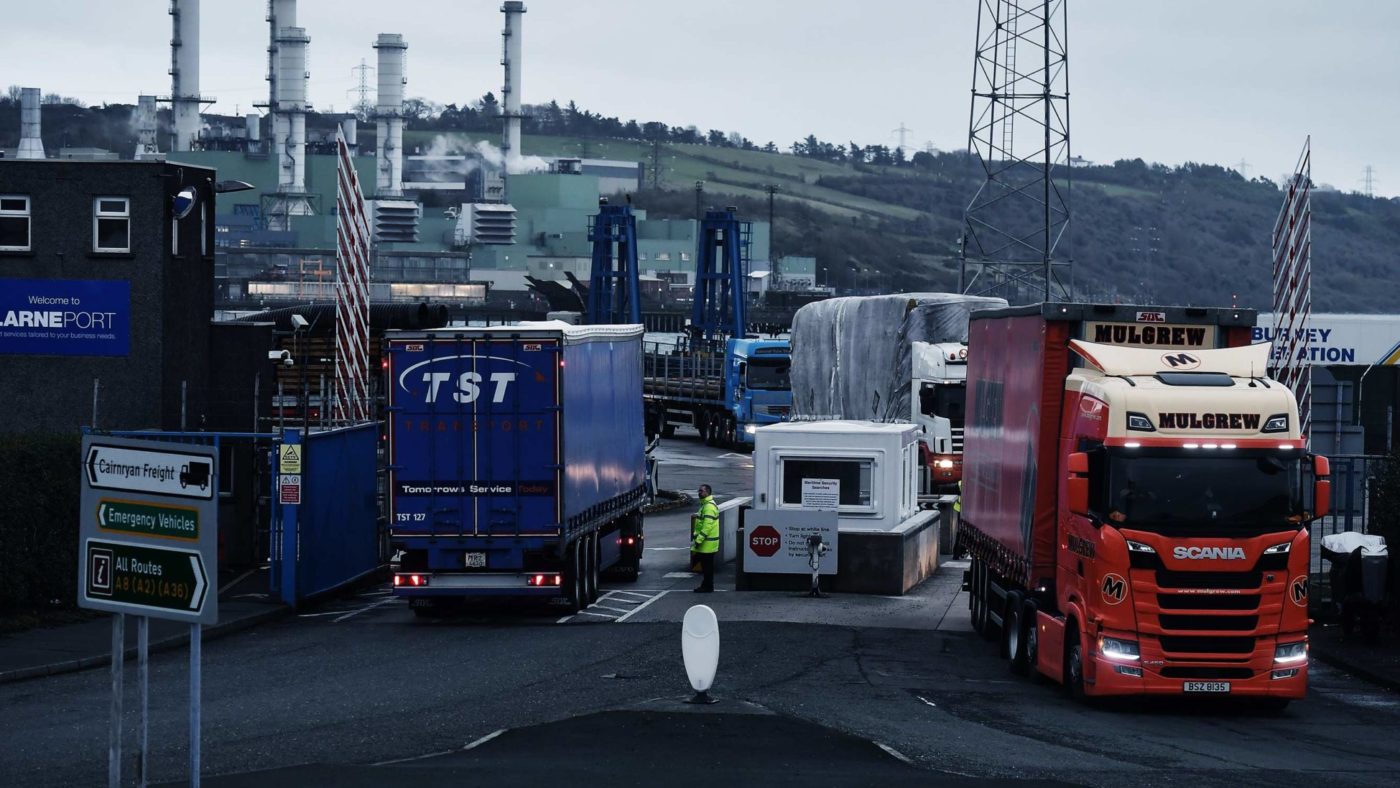 Lorries passing a checkpoint at the port of Larne Photo: Charles McQuillan/Getty Images

Lorries passing a checkpoint at the port of Larne Photo: Charles McQuillan/Getty Images

For a few weeks, it seemed that Northern Ireland was no longer a central issue in negotiations between the UK and the EU. It was a brief and blessed interlude, but we’re now back to the two sides sparring over the province’s status at the end of the transition period.

At the weekend, The Sunday Times reported that Boris Johnson’s Brexit team is drawing up plans to avoid implementing checks on goods moving from Great Britain to Northern Ireland. That prompted Germany’s Europe Minister, Michael Roth, to warn “our friends in London” that they must “keep (their) promises based on the protocol” agreed last year. Michel Barnier described checks as an “indispensable” element of the deal Johnson struck with the EU.

If the press reports are accurate, the Prime Minister’s strategy is risky, even by his standards.

We know that he signed an agreement that effectively means Northern Ireland will remain in the single market, for goods and agriculture at least, as the rest of the country leaves at the end of the year. In addition, the province must continue to apply the EU customs code and, by default, businesses here will pay tariffs up-front on any goods that they bring in from Great Britain for processing.

Johnson’s deal amounted to an agreement to erect an internal regulatory and customs border for trade moving across the Irish Sea. Now, having made that concession, it seems he’s asking his ministers to devise a fiendish plan to avoid implementing their commitments.

If this ruse is cunning enough, it will not be presented in those terms. Johnson has consistently claimed that there will be “unfettered access” for companies trading from Northern Ireland to Great Britain. According to the deal that restored power-sharing at Stormont, this undertaking will be enshrined in domestic law, through an amendment to the Northern Ireland Act. Only recently has he become equally adamant about GB to NI trade.

During a visit to Londonderry on Tuesday, the new Secretary of State for Northern Ireland, Brandon Lewis, repeated the government’s claim that “there will not be a border down the Irish Sea, there will be unfettered access for business.” A statement from Downing Street asserted that there will be “limited changes” to trade between Great Britain and Ulster, while the Treasury minister, Lord Agnew, told the House of Lords “light touch regulation” might be needed’, in response to a question from UUP peer Lord Empey.

Notably ‘unfettered access’, ‘limited changes’ and ‘light-touch regulation’ are all subjective terms. And increasingly it seems that a border can be defined at the convenience of politicians too. For four years nationalists claimed that there could be no border at the international frontier between the UK and the Republic of Ireland.

Ambiguity aside, The Sunday Times quotes a “senior source” who says, “there is deadly serious internal work going on about not obeying the Northern Ireland protocol”. The implication is that the Withdrawal Agreement does include checks on goods, something amounting to an internal-UK trade border and all the other features that, to a layman, seemed to be in the document in black and white.

Reportedly, the former attorney-general, Geoffrey Cox, was replaced by Suella Braverman during the Cabinet reshuffle because he was not prepared to give advice that allowed the Government to reinterpret the Withdrawal Agreement. Having insisted that the deal doesn’t require checks between Great Britain and Northern Ireland the Prime Minister is now looking for a legal rationale to back up his argument.

That’s a novel and distinctly odd way to do business. In fact, it seems entirely the wrong way round.

For unionists across the UK, and for anyone in Northern Ireland, it’s a relief at least that Johnson recognises there is a problem with the protocol. The province sells four times the value of goods to Great Britain than it exports to the Republic of Ireland. Importantly, it brings in most of its products from the mainland too. For Dublin politicians, nationalists and Remainers, it was an impressive achievement to make the Irish land border rather than trade barriers in the Irish Sea the focus of the fiercest debates.

On the other hand, trade talks between the UK and the EU have not yet started properly and both sides seem determined to adopt a tough negotiating position right at the start. Northern Irish unionists have seen how malleable Boris’s iron fist can become, once he gets within sight of closing a deal. They would be naïve to expect him to act more consistently, as negotiations continue over the course of 2020.

The document that sets out the UK’s official ‘approach to negotiations’, published yesterday, certainly doesn’t mention revisiting the protocol. Indeed, the threat to walk away from talks in June unless the ‘broad outline’ of a deal has already been agreed is intended to give the government time to “focus solely on continuing domestic preparations to exit the transition period in an orderly fashion.” This clause has been drafted in a way that could easily include preparing infrastructure at Irish Sea ports.

It was always glaringly apparent that the Withdrawal Agreement threatened to cut Northern Ireland off from the rest of the UK. The pretext that there would not be a border in the Irish Sea was flimsy and unconvincing from the outset. The easiest and most obvious way to avoid the worst barriers to trade between Great Britain and Northern Ireland is still to sign a comprehensive trade deal with the EU; though it’s understandable that the British side doesn’t want to appear too desperate to reach that outcome.

It’s just about possible that the government really can devise a plan to wriggle out of the worst aspects of the Withdrawal Agreement, but it doesn’t seem likely. And, if its provisions were so unacceptable, why on earth did Boris sign up to the Northern Ireland protocol in the first place?

Owen Polley is a writer, commentator, consultant, and the co-author 'An Agenda for Northern Ireland After Brexit'